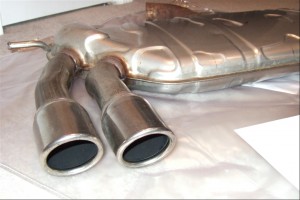 We all know that when a muffler fails, your car can potentially break noise ordinances! While the ‘vroom-vroom’ is rather cool, the fact of the matter is, if the throaty growl of a muscle car is not intentional – you likely need to take your vehicle for a full exhaust system check-up and BMW muffler repair in Everett to the foreign car service specialists in Everett, Lynnwood, Mukilteo, Mill Creek, Lake Stevens, Snohomish, Marysville, Arlington…

Have you ever pondered the simple elegance of a car’s muffler? A true engineering marvel, this sound dampening portion of the exhaust system relies on the science of sound waves to operate.

Alternating bursts of air pressure (high and low) form a pressure wave that creates sound. The sequence of events:

The primary components of the sound wave that affect what you hear:

A muffler is designed to combat excessive noise by using opposing sound waves to partially cancel each other out – how simply elegant is that?

The eardrum can only process 1 pressure at a time. All the sound waves created at a specific moment in time are essentially added together to produce a single wave to your eardrum. This scientific fact is how sound is effectively reduced with the addition of more sound waves! Sound waves, when visualized on an oscilloscope occur as sine waves as shown:

Using the destructive interference technique, mufflers are designed to subtract as much resulting sound as possible from the pressure waves created by the car’s exhaust.

An automotive muffler is comprised of the following:

The resonating chamber for each muffler is carefully designed to allow the (hopefully) perfect length that the waves need to travel to intersect properly. This is but 1 type of muffler, some are simple in-out with a glass insulation wrapping to absorb the sound waves. Ask the BMW muffler Everett Experts for advice/inspection/repair/replacement in Everett, Lynnwood, Mukilteo, Mill Creek, Lake Stevens, Snohomish, Marysville, Arlington regarding the specifics of your vehicle’s muffler.