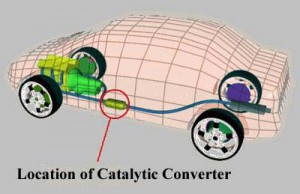 As with any vehicle operated in the United States today, the Everett Porsche Catalytic Convertor Service must be monitored to assure it is operating properly. In counties that require emissions testing, the performance of your vehicle’s catalytic convertor is monitored on a regular basis. For counties that do not require admissions testing, you can have your Porsche Catalytic Convertor performance monitored by requesting either an On Board Diagnotic (OBD) or a tailpipe emissions test.

In a perfect world, every car’s engine burns fuel at 100% efficiency. This perfect combustion with regard to gasoline means that the stoichiometric ratio of air to fuel is 14.7:1; meaning that 14.7 pounds of air is required to burn 1-pound of gasoline.

A car engine’s primary emissions are:

Nitrogen and water are benign and not harmful to the environment. Carbon dioxide (CO2) contributes to global warming (it is thought that CO2 is harmful to the ozone layer). In addition to the prevalent yet benign exhaust, there are 3-hazardous emissions resulting from incomplete combustion:

What is a Catalyst?

cat·a·lyst /’katl-ist/ (noun): 1. A substance that increases the rate of a chemical reaction without itself undergoing any permanent change  (Merriam-Webster)

As point of clarification, when speaking of oxidizing or reducing the emissions, this is a chemical reaction between the exhaust gases and the catalyst materials:

The Process of Catalytic Conversion

The engine’s exhaust first passes through the reduction catalyst. Using platinum and rhodium, reduces the NOx emissions. Coming in contact with the catalyst, separates Nitrogen from the NO and NO2 molecules; the Nitrogen is retained while the Oxygen is emitted as O2:

The second stage of the catalytic converter is the oxidation catalyst. Hydrocarbons and Carbon Monoxide (CO) are oxidized as they pass across the platinum and palladium catalyst, reducing the amount of  the harmful emissions:

The final stage of the catalytic converter is the control system that monitors the final exhaust. The information from the control system is relayed to the fuel injection system, regulating the amount of fuel passed into the combustion chamber. Additionally, there is an O2 sensor between the engine and the catalytic converter that measures the amount of O2 in the pre-treated exhaust; relaying the information to the air-fuel ratio meter, adjusting the amount of O2 as indicated.